Home > Who We Are > Private: Latest Blog Posts from NCJW|LA > News > What are we advocating for?

What are we advocating for? 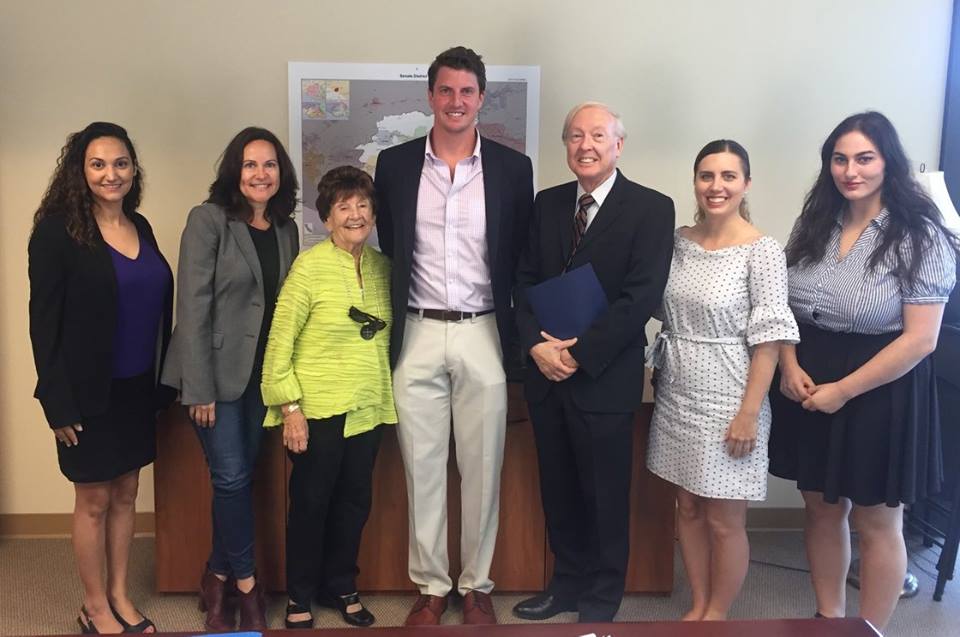 Our visit with Senator Stern on August 25, 2017. We were also honored to meet Holocaust survivor Sidonia Lax during the meeting.

In 2012 NCJW|LA sponsored SB 1193, a law that made it mandatory for twelve different types of businesses to put up posters with human trafficking hotline information. We then created the Human trafficking Outreach Project to train volunteers to go out to the businesses, give them posters, and explain the law to them. Since these posters have been put up in different businesses such as hospitals, strip clubs, and bars, the  local human trafficking hot line has had an increase in calls due to poster viewings by over 400%.   This research has shown that this type of policy is one of the most successful ways for victims, survivors, and witnesses of human trafficking to access help. This year, NCJW|LA is sponsoring another bill, serving as an extension to the original bill, which adds a texting line to the posters. Often times, victims of human trafficking can’t call the hotline and talk on the phone with their traffickers nearby; with a textline they would be able to silently send a message to the human trafficking hotline. This bill is currently in the Assembly.

SB 54, also known as “The California Values Act,” makes California a “sanctuary state.” Recently, under the President’s Executive Orders, we have seen a mass deportation strategy tearing apart families at an alarming rate. This bill would stop local and state law enforcement from working with ICE or as deportation officers, and stops immigration officials from going into schools, hospitals, and courthouses. ICE arrests outside of schools and courthouses have had a chilling effect on the immigrant community and access to these are essential to carrying out basic state and local functions. Everyone deserves access to schools and hospitals without fear regardless of their immigration status. A report by the University of Illinois found that “44 percent of Latinos are less likely to contact police officers if they have been the victim of a crime because they fear that police officers will use this interaction as an opportunity to inquire about their immigration status ”. By making California a sanctuary state we would ensure that immigrant families could contact law enforcement without fear of deportation, and that tax payer money isn’t going to be used to separate families.  This bill is currently in Assembly Appropriations.

Under current California law, only those who work in a business of 50 or more employees are eligible for job-protected parental leave. This leaves far too many Californians with the impossible choice between the well-being of their new child and their financial security.  A 2011 field poll  found that 2 out of 5 employees who were eligible to use paid family leave did not apply for the benefit out of fear of losing their job or other negative consequences at work. SB 63 would allow employees who work for a company with 20 or more employees, and who live within a 75-mile radius of their office, to take up to 12 weeks of job-protected leave to care for a new child.  This measure would benefit 2.7 million more Californians, but only affect 6% of businesses.  This bill is currently in the Assembly Appropriations Committee.

SB 10 would reform California’s money bail system and replace the current pretrial process that often forces lower income people accused of minor crimes to remain in jail until a court can determine their innocence or guilt while the wealthy go free. On any given day, 63% or roughly 46,000 Californians are awaiting trial or sentencing in a county jail, simply because they cannot afford to post bail. The current process is devastating for lower income individuals who can end up losing their jobs, their homes and almost anything of value, and creates great difficulties for families. Many innocent people charged with minor crimes who are unable to pay bail plead guilty simply to get out of jail, keep their jobs, and return to their families. This bill requires that a pretrial service agency conduct a risk assessment and prepares a report that makes recommendations to the conditions of release for the person in pretrial, except in the case of specified violent felonies. This bill is currently in the Assembly Appropriations Committee.

The Reproductive Health Nondiscrimination Act amends the California Labor Code to protect employees from discrimination in the workplace based on personal reproductive health care decisions. It prohibits an employer from firing a woman for using birth control, being pregnant and unmarried, or using in vitro fertilization. Women around the country, as well as within California , have been threatened or fired from their jobs based on their reproductive health choices. An example of this was when financial aid specialist Teri James was fired from San Diego Christian College in 2012 for becoming pregnant while unmarried. This is a matter of reproductive rights and economic security for women and their families.  Women’s reproductive choices should not affect or limit their ability to provide for themselves and their families. This bill is currently in the Senate Appropriations Committee.

AB 262 requires the state to spend public dollars on infrastructure materials in a way that is consistent with state climate pollution reduction goals and recognizes clean manufacturers. Currently, California spends billions of dollars a year on infrastructure projects, which accounts for 24% of California’s greenhouse gas emissions.  State law generally requires entities such as UC and CSU to award contracts to the lowest responsible bidder which do not currently take into account the greenhouse gas emissions produced during manufacturing. This bill only applies to state, UC, and CSU projects and does not apply to privately funded construction. This bill is currently in the Senate Appropriations Committee.

California is the most immigrant-rich state in the nation, one out of every four state residents is foreign born. Under current law, even a single conviction for a misdemeanor offense can result in an individual’s deportation. This bill would provide state funding to create Regional Centers and Statewide Recourse Centers for public defenders to gain immigration expertise. These centers will provide ongoing training, written materials, technical assistance, and mentoring. In recent years, hundreds of thousands of California residents have been deported and separated from their families. Right now, California does not provide funding to public defenders. This funding will help these public defenders to effectively represent immigrants and avoid deportation. Additionally, avoiding unnecessary deportations will result in significant state budget savings by avoiding the many economic and social disruptions caused by mass deportation. This bill is currently in the Senate Human Services Committee.

NCJW|LA has various opportunities to take action whether it’s from home for five minutes a week, or by getting more involved as an active volunteer. Here are some ways to get involved: