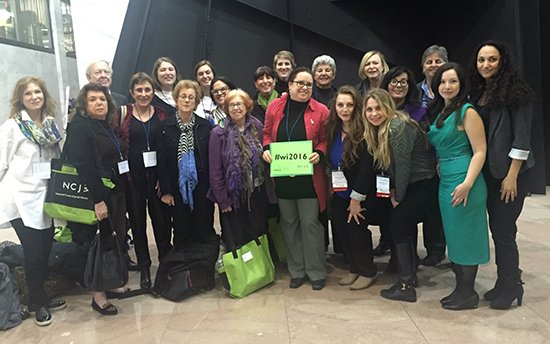 On Sunday night, we made a break from the hotel. The “under 45s” of NCJW’s Washington Institute were invited to a mixer hosted by NCJW/LA at a local bar: The Black Squirrel. It was raining and at first we wondered how many people would actually show up, but pretty soon the upstairs space was packed with excited women from around the country. This wasn’t just a hang out and chat affair. We were asked to pair up and answer questions posed to the group. When my partner from Chicago and I shared what first brought us to NCJW, we found we were both totally different and had lots in common. Reproductive justice initially connected us to NCJW. But, she’s a mother of three boys who wants to ensure a future where her boys respect women’s choices. I want to ensure choice for friends, neighbors — and myself. We both stuck with NCJW because we found we really *like* this organization. We like these strong women who aren’t afraid to voice their opinions and who are absolutely dedicated to social justice. We like the team and that through NCJW we have opportunities to make a clear difference. This is what connects us, what leads us to collaborate with each other, and what makes us advocates.

The Washington Institute was a blur of nonstop activity. The extraordinary lineup of speakers was irresistible and inspiring. On Monday night, at the Social Action Awards Dinner, I was assigned to a table with members of the Miami section. The honorees included Roberta Kaplan who represented Edith Windsor in the landmark case of US v. Windsor in which the Supreme Court ruled that a key provision of the Defense of Marriage Act violated the Constitution — and Edith Windsor herself. Roberta and Edith’s speeches were an affirmation of the power of tenacity in our common fight for social justice. With nearly 400 women and men in the room who have dedicated years to issues of equality, it looked like there wasn’t a single dry eye, and all felt invigorated to continue their advocacy. But perhaps what was even more powerful were the whispered exchanges between speeches. My Miami neighbor leaned in to ask with a sort of hopeful curiosity, “How many staff does the L.A. section have?” When I gave her my best on the spot estimate (I discovered at the Institute that NCJW’s LA. section is relatively large), she looked excited. She continued to pepper me: “What are your programs for your community? For young people? What are you working on at NCJW/LA? What brought you here?” We exchanged notes, tips, motivators, and ideas. Between speeches, we were expanding the NCJW network. We were supporting each other. We were making NCJW strong. 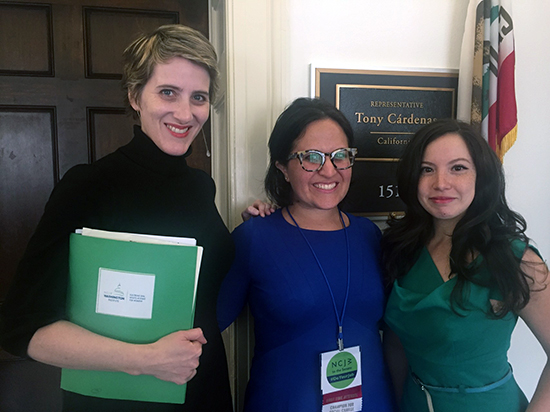 Advocacy thrives on effective collaboration. But we can’t collaborate without connecting. Back to the first morning of the Institute. We gathered in a packed hotel conference room for a Strategic Direction Group Meeting. This meeting was about building a foundation for strategic change at NCJW that will ensure the vitality and longevity of this grassroots organization. One strategic goal is to “Mobilize progressive Jewish women to impact policy and support programs in priority issues.” On one hand, it sounded like, hey, this is what we’re doing already. But, implementing this goal requires aligning NCJW’s national network and programs and expanding our strategic partnerships and alliances. The questions I heard participants from across the country asking each other throughout the Institute made it clear to me that there is indeed a hunger in the sections for greater alignment with each other. It was electrifying to hear the exchanges and I’m excited to see NCJW’s next steps in implementing this goal and connecting the sections — soon to be called affiliates — nationwide. (The NCJW/LA section was particularly vocal during this session — go L.A.!)

Strategic partnerships and alliances were a theme throughout much of the Institute’s programs. Sunday afternoon’s discussion on Abortion Coverage featured Destiny Lopez, Co-Director of the All Above All campaign, a national initiative which “unites organizations and individuals to build support for lifting the bans that deny abortion coverage,” and Shivana Jorawar, Lawyer & Policy Advocate with the National Abortion Federation (NAF). The discussion was moderated by Cheryl Berenson, NCJW Washington State Policy Advocate. NCJW partners with both All Above All and the NAF who of course partner with each other. Focusing on the impact of the Hyde Amendment which denies abortion coverage to women enrolled in federal health programs, Jorawar said the NAF receives about 5,000 calls from women seeking abortions a day, and most of the women can’t afford it. After laying out more startling facts, Jorawar and Lopez discussed partnerships and alliances — making connections and finding the common issues that will unite us behind reproductive justice — as a means of effective advocacy. We can have more impact when we recognize abortion access as a racial and economic justice issue, not simply a legal rights issue, and give our legislators and partners broader language to use in support of choice. According to the speakers, the labor movement, for example, is largely driven by poor women. Since abortion issues disproportionately affect poor women, they impact labor organizing. For the first time, Hyde is being recognized in the agendas of national Latino/a organizations. When we recognize the breadth and depth of the abortion coverage issue and other social justice issues, we find new opportunities to partner with other organizations, making both our work, and theirs, stronger and more effective. As such, increasing partnerships and alliances is the future for social justice and the future for NCJW. 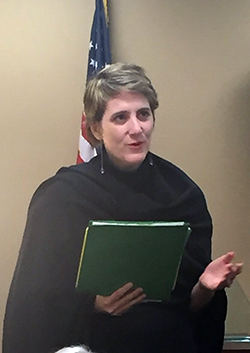 To my delight, a question during the passionate Q&A that followed the discussion raised the idea of shared narratives for changing anti-choice culture. Jorawar co-founded Jahajee Sisters, a grassroots organization based in New York City that works to liberate Indo-Caribbean women through dialogue and the arts. She agreed that storytelling is key and Lopez discussed the All Above All bus cross-country roadtrip. At stops along the way, they conducted “abortion speak-outs where people told their abortion stories in public on the hour, every hour.” For the past two years, NCJWLA’s Roe v. Wade Anniversary celebration program, on which I’ve worked, has focused on storytelling, recognizing it as a positive means of changing conversations about abortion nationwide. At the Washington Institute, it was clear that the idea of shared narratives to drive action for social justice is taking root.

Alliances and shared narratives were Monday afternoon’s theme, as well, through a series of workshops called “Connecting the Dots: Intersections in Social Justice Workshops.” I attended the “Why Black Lives Matter is a Reproductive Justice Issue” workshop facilitated by the brilliant Monica Raye Simpson. Simpson is the Executive Director of SisterSong: Women of Color Reproductive Justice Collective. Simpson gave us crayons and paper to draw the stories of what led each of us to be passionate about reproductive justice, and we shared our stories with each other. We then worked in groups to analyze quotes and images from protests, cases, and articles discussing race related issues, and take another look at these same words and images as reflective of reproductive justice issues. It was powerful and eye opening, but most importantly, it opened the door to a deeper understanding and new partnerships across organizations and with each other.

It was a thrill to attend these sessions with 20 of my fellow NCJW/LA section members and staff, as well as 41 other members from across California. Not only did what we learn at the Washington Institute embolden us for our day on Capitol Hill, it prepared us to take our advocacy to the next level in our hometown, our home state, and nationwide. I think I can safely say on behalf of my fellow NCJW/LA members, “We can’t wait!”

Rosalind Helfand is a programs and policy consultant for nonprofits and government, an L.A. native, and an active volunteer for NCJW/LA.