Home > Who We Are > Private: Latest Blog Posts from NCJW|LA > News > What It Means to “Act for Women” in Our Nation’s Capitol 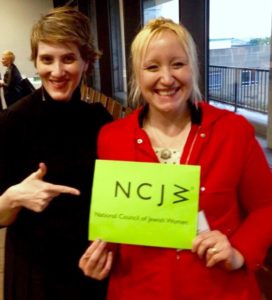 I’m looking at a big stack of business cards on my desk — all gathered from members of Congress and their staff on Capitol Hill. Some of those members are already supporters of the Women’s Health Protection Act or WHPA (S.217/H.R. 448). But some of them still need to sign on. Looking at the news, I’m biting my lip hoping those others will get on board soon — and more, and more. I’m hoping we can create an avalanche of national action because, last week, Oklahoma’s state legislators passed a bill to outright criminalize the act of performing an abortion.

This bill was vetoed by Oklahoma’s governor. If signed into law it would have meant another lengthy legal battle on behalf of Oklahoma’s women. With Oklahoma down to just two clinics in their state, women there are already suffering. Even though it wasn’t signed, there’s no time to take a break, no room to breathe — there will be another attack on abortion access by Oklahoma lawmakers, soon. And another, and another… and another.

This is why I joined the Act for Women campaign as NCJW California’s representative this month. Formed from a coalition of over 58 local, state, and national organizations supporting WHPA, this campaign is a truly diverse national movement. One of 110 women and men who walked Capitol Hill, I was placed on a powerhouse team sticking up for women: Dr. Michael Rothrock, a tech executive who inherited a women’s health clinic in Louisiana from his mother; Liza Fuentes, a researcher and Senior Project Manager at Ibis Reproductive Health who’s been looking at the impact of HB2 in Texas (the law at the center of the Whole Woman’s Health v. Hellerstedt case being considered by the Supreme Court); Amanda Allen, Senior State Legislative Counsel with the Center for Reproductive Rights; and Allison Parker, a Legislative Specialist at the Planned Parenthood Federation of America. We made a determined group. These days, unwavering determination is what’s called for. 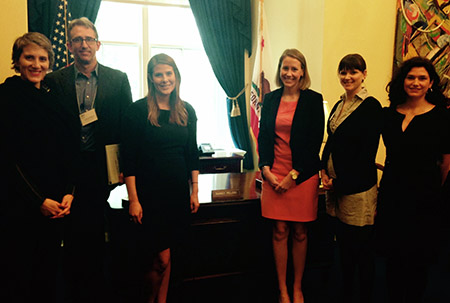 Since 2011, around 2,172 bills that would impact reproductive health services for women have been introduced across the U.S. Nearly 300 have become law. When these bills don’t become law, it’s often only after a long, tiring battle. What’s more, these bills are embedded in a cloud of propaganda about protecting women’s health, but in reality are usually driven by a vocal religious minority that has been enfranchised by lawmakers to negatively impact the healthcare of many millions of women.

WHPA will break this offense / defense cycle — permanently. Don’t be cynical. I mean it when I say permanently and I know we can do it. WHPA will prohibit states from imposing restrictions on abortion greater than comparable medical care, that close clinics and force unnecessary procedures on women, interfere with a patient’s personal decision making, and block access to safe and legal abortion care. WHPA is proactive. It lays the groundwork for women in each state to have equal access to abortion and reproductive health services, as well as equal constitutional rights — that do not depend on your zip code. It recognizes that women who are poor or minorities — wherever they live — are disproportionately impacted by onerous anti-abortion laws, and deserve justice.

The National Council of Jewish Women (NCJW) is one of 28 faith-based organizations and several Jewish organizations that have joined the Act for Women Campaign. In Washington, D.C., I met up with NCJW section members from Washington, Florida, Tennessee, D.C., Massachusetts, and New Jersey. Each felt the same determination to stop the constant attacks in their tracks. We wore our walking shoes and took to the halls of Congress, where we spoke with our legislators about supporting WHPA — and if already supporting, about becoming WHPA’s vocal advocates and educating their constituents back home. We also talked about why WHPA matters from a Jewish values perspective.

Our values speak to the core of this nationwide never-ending attack on women’s health care. A joint letter from the faith-based organizations reads:

Protecting safe, legal access to abortion is a moral imperative, rooted in our deeply-held beliefs in social justice, women’s moral agency and religious liberty for all. As people of faith, we value every person as a moral decision-maker who is free to make personal decisions about their reproductive lives based on their own beliefs and conscience.

For me, “women’s moral agency” and being your own “moral decision-maker” are central issues in this battle. Every time a bill eroding women’s access to abortion passes, a blow has been struck for women overall. According to Wikipedia, “A moral agent is ‘a being who is capable of acting with reference to right and wrong.” It is imperative that our lawmakers pass this federal law and not leave the states to themselves. Each anti-abortion law that passes erodes the status of women as people who can make their own decisions about what is right and what is wrong. NCJW is deeply concerned about the threat to our moral agency, and we should be, too. 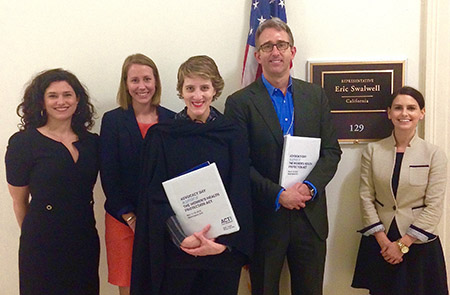 Outside U.S. Representative Eric Swalwell’s office (D-CA). Met with his staff to urge his help in gaining more co-sponsors for the bill – he is a co-sponsor. Left to right: Liza Fuentes, Allison Parker, Rosalind Helfand, Dr. Michael Rothrock, and Sarah Kaplan (of Rep. Swalwell’s office).

Religious groups often paint abortion as a practice without support from religious peoples. The reality is that the majority of women of faith in the U.S support full reproductive health care for women. This means women making decisions informed by their individual moral frameworks. The onslaught of anti-abortion bills is undermining women’s status as full human beings capable of differentiating right from wrong. In the U.S. today, women are divided between those who have access to abortion care and those who are effectively barred from it. This means some women have become more equal under our constitution than others. This must be stopped and reversed.

As of May 19th, there are 139 co-sponsors of WHPA in the House and 33 in the Senate. While a number of the offices we met with expressed somewhat cynical support for WHPA because of the anti-abortion Congressional majority, we believe that there is cause for hope. Every office we win as a co-sponsor (eleven more have signed on since May 12th) is cause to celebrate. The pressure is building. We’re improving the visibility of the movement. And we’re increasing national awareness of our mission: set federal standards to keep clinics open, allow women to make decisions with their doctors, and ensure our moral agency and constitutional rights will no longer be undermined.

Join NCJW and let’s get the word out about the Women’s Health Protection Act!
Learn more at: www.actforwomen.org

Rosalind Helfand is a programs and policy consultant for nonprofits and government, an L.A. native, and an active volunteer for NCJW/LA.